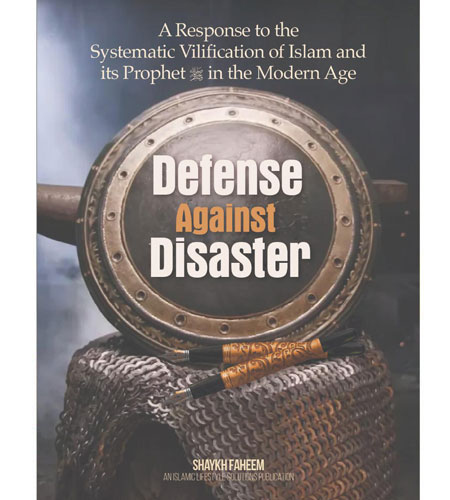 Defense against Disaster is an intellectual defense which stands to exhibit the systematic vilification of Islam and its Prophet (peace be upon him) by refuting the many false allegations propagated against its tenets and values by a thorough analysis of the Quranic corpus, the Hadith literature as well as the rational faculty!

Whether it is cartoon, newspapers, magazines, books, movies, television series, social media, talk-shows, or even YouTube videos, there is no uncharted territory free from hate-speech or derogatory remarks against Islam and Muslims. Where then, is the call for justice and protection of religious rights from the secular world when Muslims are targeted on every level?

The Prophet Muhammad (peace be upon him) has benn labelled as a ‘pedophile’. The Quran has been accused of promoting its adherents to ‘kill all infidels’. Muslims have been viewed as mindless sheep unable to ponder scientific notions. This work stands to refute those bizarre allegations with proof from the Quran, the Prophetic way as well as intellectual probing.

Stories of the Prophets for the Modern Age – Volume 1v

Login to Shaykh Faheem
Reset Password
Enter the username or e-mail you used in your profile. A password reset link will be sent to you by email.